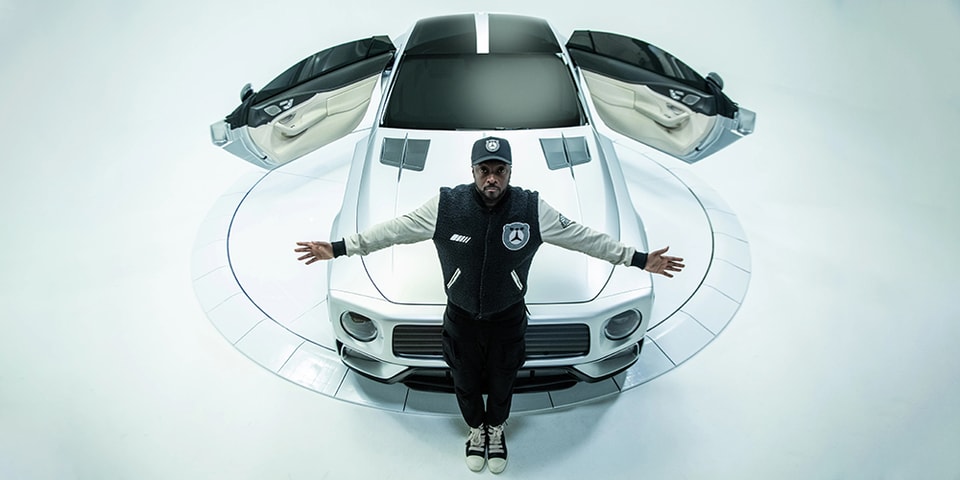 For many of those who grew up in the 1980s and ‘90s, Mercedes-Benz is a lifestyle. Per will.i.am’s rapping in his exclusive interview with HYPEBEAST, he reminded us how the German marque is intrinsically woven into music – “Me and Lorenzo rollin’ in the Benzo” from NWA’s “Fuck Tha Police” and “The AMG kit keeps us closer to the ground” of Sir Mix-a-Lot’s “Posse’ on Broadway” are only a small percentage of lyrics that infiltrated the hip hop scene 30 years ago. Couple that with Rakim rocking Mercedes chains or JAY-Z and Kanye West destroying a Maybach in the “Otis” music video, and Mercedes-Benz’s prevalence in music is undeniably enviable.

Likewise, Mercedes-Benz is also heavily referenced in fashion. Palace returned to its Mercedes-AMG partnership this March, Virgil Abloh’s collaboration with the brand concluded with the co-designed Maybach S-Class and apparel collection, while A$AP Rocky’s AWGE, Proenza Schouler and Heron Preston have all shifted gears to collaborate with the manufacturer. Now, Mercedes-Benz enters a new era, one punctuated by WILL.I.AMG, its new collaboration with will.i.am.

WILL.I.AMG’s aim is to prepare inner-city kids for a future that they can be a part of, harnessed by the understanding and learning of robotics, autonomy, and STEAM education. The collaboration comprises “The Flip,” a car developed by will.i.am and West Coast Customs, and an accompanying merch collection dubbed “BEAR WITNESS.” Combined, it’s a collaboration close to the Black Eyed Peas’ frontman’s heart: “My dream was to get a car and customize it,” he explains. “My dream was never to have the gold chains and teeth, although that’s still part of hip hop because a big part [of it is about] bedazzling itself and over-accessorizing with jewelry. My dream was always customizing cars.”

Everything will.i.am touches has to have a purpose. While our interview was littered with far-reaching metaphors, not out of reach for will.i.am’s eccentric character, there is a method to his madness. “The whole premise is to auction this car off and we use the proceeds to build robotics teams,” explained will.i.am.

“If you look at the investments in our inner cities, the hood is f*cked by 2040. We’re not going to understand the complexities of how to navigate the autonomous world. No one is preparing them. We’re not having the conversation about how urgent it is. It’s the most urgent f*cking thing,” added will.i.am.

“The exit out of the hood is not always only music and athletics and designing apparel.”

Over the last 11 years, will.i.am has enabled graduates of his education programs in East Los Angeles to enroll at various Ivy League schools in the States. For him, it proves that “the exit out of the hood is not always only music and athletics and designing apparel.” He lives in a world that’s both eagerly anticipating the future and fearing it, and to succeed, will.i.am recognized that robotics, engineering, technology education, mathematics and more need to be taught to inner-city kids so that they can be a part of their own future.

“We’re barely dealing with race relations; racism is still in effect and we’re still trying to figure that out,” says will.i.am. “There is shit that is going to change how Black and Brown people are looked at when no one is training the data, no one is building the algorithms. The algorithms are important when you have a fleet of police drones in your neighborhood. They’re like ‘we’re programming the algorithms to understand our conditions.’ We can’t even deal with the police in our neighborhoods today, and that’s humans!”

WILL.I.AMG was born to further will.i.am’s educational support and to better the world as we’re soon to know it. It is not merely a car collaboration, nor a design exercise to generate buzz. As well as spreading the word for all of will.i.am’s philanthropic work, it also encourages kids to get their hands greasy.

“I come from The Projects, I lived in Boyle Heights for 27 years. My mom grew up in The Projects and she was there for 50 years. Yes, I had a headstart because the music was my entry point into building, because of my music success, but what it tells them is that most of the people who built the car are Black and Brown,” says will.i.am. “Our predicament and configuration, the way it’s told, does not mean it has to be that way forever… Lewis Hamilton is proof – he joined a profession that Black people weren’t in, and dominated it. I’m not just going to be okay, I’m going to be the f*cking best. I’m going to beat all the records.”

The core purpose of WILL.I.AMG is to serve the community. But, it also goes to show will.i.am’s creativity. Making “The Flip” was more than just a rolling sculpture – it’s a fully-fledged depiction of what we can expect from the future (or at least, the future will.i.am sees for us all).

The self-funded car is based on a Mercedes-AMG GT 63 Four-Door Coupé, but its similarities to the production car end there. “When Mercedes saw the work in progress, they were surprised that this was the level of build that I was doing. They thought I was making a show car, because that’s what most people from our community build. Paint it or change the rims, build it to where it doesn’t matter if it moves or not. To me, it has to move, it has to drive, you have to keep the same integrity and safety of the original car.”

Working with West Coast Customs, “The Flip” is the embodiment of how will.i.am thinks, especially when it comes to music. His approach to sampling is informed and it goes further than making hit songs for his own band and dozens of huge music stars. When asked about the design process of “The Flip,” will.i.am simply replied, “I sampled. I make music because of computers.”

Digging deeper, it’s a design that draws from Mercedes-Benz’s evocative history of simplistic and ultra-luxe designs derived from the SL series, notably the Mercedes-Benz 300 SL “Gullwing,” SLS, and Mercedes-McLaren SLR. “[Mercedes-Benz’s Chief Design] Officer Gordon Wagener is my James Brown in this metaphor, I want to sample his design perspective. I wanted to sample this particular GT 63, that’s the drum loop, and the baseline is the long nose, and the Jimi Hendrix guitar sample is the G Wagon front.”

Indeed, “The Flip” combines elements of the GT 63, the SL Series, and the nose from a G Wagon. Bastardization or revolutionary, you decide, but for will.i.am it all makes sense in a warped take on perfection. “I see the James Brown jazzy funk drum loop, I see the Ron Carter because that’s jazz, I see why you went to Stan Getz because that’s jazz, but why the Jimi Hendrix guitar riff on all-jazz samples? That’s the G Wagon nose. That’s the audacity.” Through this, he’s referencing the squared-off anti-aero cars that Mercedes-Benz was loved for in the ‘80s – the same ones on rapper’s album covers and in the aforementioned lyrics – and it recalls the era in which will.i.am grew up, harkening back to his dream to design his own car.

“You only have a relationship with the car when you’re in the car. That’s not futuristic.”

But as we’ve come to expect from a man who lives between now and tomorrow, futurism also plays a considerable role in “The Flip,” both in its design and its message to the community. “The future could be living underwater in bubble cities,” he says. “I think the future of a designer can be anything. For this, the futurism of the vehicle is not about what the car looks like, it’s about what the car does. No matter what the car does or looks like, ultra-technical or basic, they all serve the driver the same relationship – you only have a relationship with the car when you’re in the car. That’s not futuristic.”

Instead, will.i.am likens “The Flip” to your relationship with a smartphone. Carrying one everywhere with you means you always have a connection with some form of computer, and seeing as a car is one of the most expensive things you can buy, will.i.am believes it’s time for us to reconsider how we connect with our four-wheeled machines. “We put a connective tissue platform in the vehicle that is truly mobile so you have a relationship with the car when you’re not in the car. It’s a connective brain, a better brain if you will.” While more on this is yet to come from this collaboration, what it promises is a connective future between owner and car, car and world; a world of robotics, autonomy and kids learning to work with this level of technology.

As far as will.i.am is concerned, it’s as clear-cut as this: “You don’t have to be the best musician to be the greatest artist. But in the car industry, you need to be the best engineer to have the best car. Fact.” In order to do so, inner-city kids (and everyone, at that) need to be prepared for the soon-coming future. WILL.I.AMG’s “The Flip” represents our soon-to-be reality, but it’s a concept that will.i.am has been living and creating for the last decade through his work. “I just do it, to do it. It’s the most important thing I can do with my time and the success that I’ve had with the information and the network that I have to get it done. Now I realize that I need to work harder, smarter and faster because the clock is ticking. It’s a couple of years before these car companies release a fleet of autonomous vehicles, that sounds awesome but at the same time I’m like, holy shit.”

WILL.I.AMG’s “The Flip” is an invitation to join will.i.am in the future. In our lifetime, there will be a handful of figures that will change the world as we know it, and will.i.am hopes to be the vanguard of this prospect. Simply put by the man himself, “Mercedes has never done this level of collaboration.”