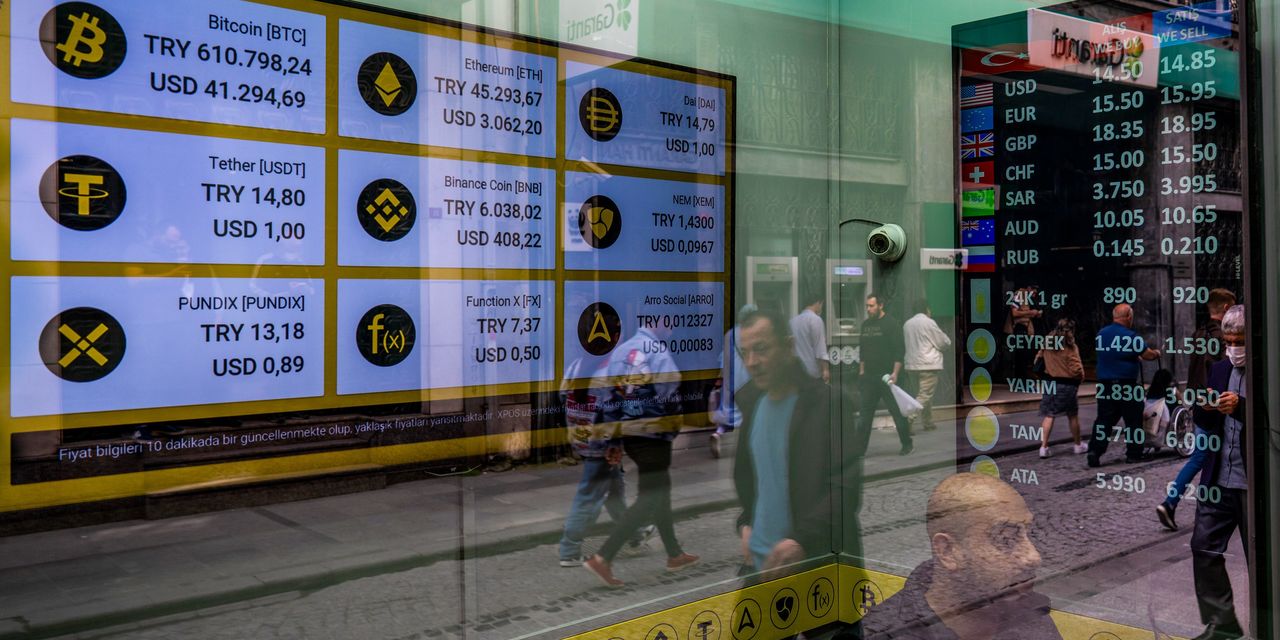 Bitcoin was up about 5% Friday from its 5 p.m. ET level Thursday, trading around $30,000, after falling below $26,000 Thursday. Ether, the second-largest cryptocurrency by market value, rose nearly 7%.

TerraUSD fell to 10 cents early Friday, having declined 82% over the previous 24 hours, according to CoinDesk. It edged up to about 14 cents late afternoon. The formerly third-largest stablecoin—a type of cryptocurrency known for its stability—has come off its $1 peg following a wave of selling that started at the weekend. Its decline has taken its sister token, Luna, down with it and has weighed on bitcoin. Luna fell to less than a half-cent Friday, down from more than $60 Monday.

The blockchain underlying TerraUSD and Luna had been twice halted as its network validators seek to stabilize the digital assets. Binance, the largest cryptocurrency exchange by volume, suspended trading of both TerraUSD and Luna late Thursday.

On Friday, both the blockchain and Binance’s trading of TerraUSD and Luna resumed, according to the companies.

Stablecoins have surged in popularity the past two years and now act as the grease that moves the gears of the cryptocurrency ecosystem. Traders prefer to buy coins such as bitcoin, ether and dogecoin using digital assets that are pegged to the dollar because when they buy or sell, the price is only moving on one side. They also allow for fast trading without the settlement times associated with government-issued currencies, which can take days.

While the most popular stablecoins maintain their levels with assets that include dollar-denominated debt and cash, TerraUSD is an algorithmic stablecoin, which relies on financial engineering to maintain its link to the dollar.

In the past, TerraUSD maintained its $1 price by relying on traders who acted as its backstop. When it fell below the peg, traders would burn the stablecoin—removing it from circulation—by exchanging TerraUSD for $1 worth of new units of Luna. That action reduced the supply of TerraUSD and raised its price.

Conversely, when TerraUSD’s value rose above $1, traders could burn Luna and create new TerraUSD, thus increasing the supply of the stablecoin and lowering its price back toward $1.

That financial engineering to maintain its peg began to falter over the weekend with a series of large withdrawals of TerraUSD from Anchor Protocol, a sort of decentralized bank for crypto investors.

Meanwhile, TerraUSD was sold for stablecoins backed by traditional assets through various liquidity pools that contribute to the stability of the peg, as well as through cryptocurrency exchanges. The sudden outflow spooked some traders who began selling TerraUSD and Luna.

A reserve fund of about $3 billion in bitcoin and other cryptocurrency resources, owned by the Luna Foundation Guard, has been largely depleted amid an emergency effort to salvage TerraUSD, according to the fund’s data dashboard. The fund’s selling contributed to a sharp drop in bitcoin’s price earlier this week, analysts and traders said.

Write to Caitlin Ostroff at caitlin.ostroff@wsj.com