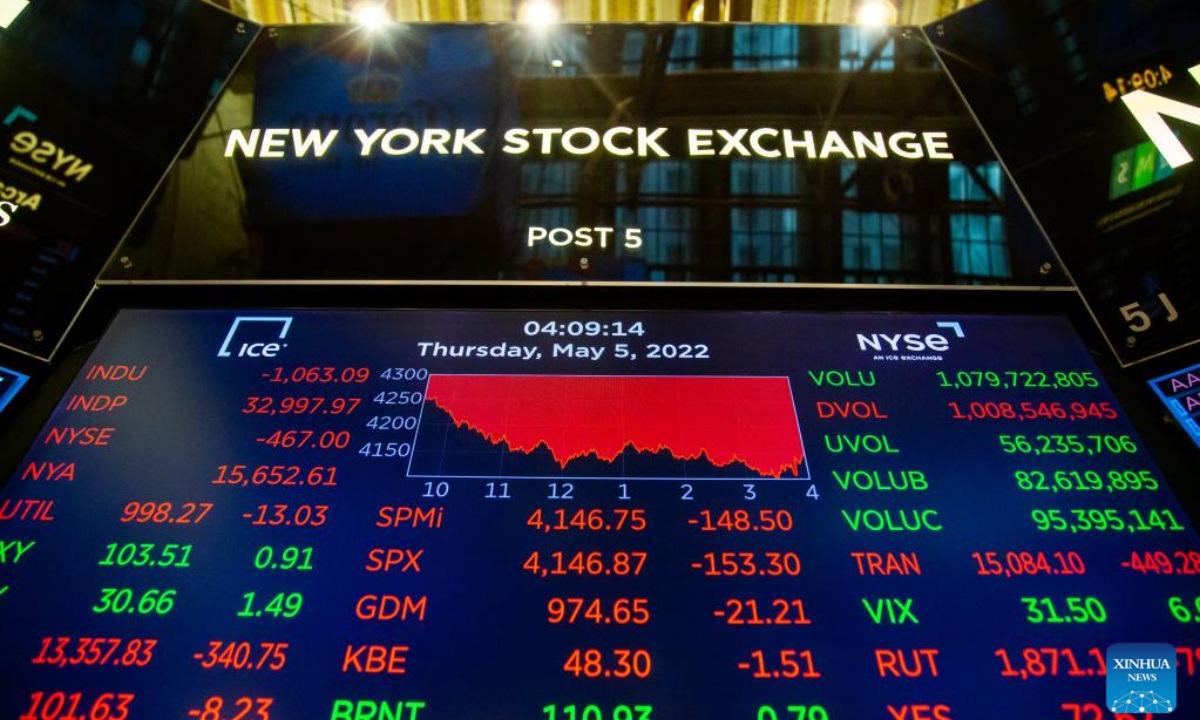 US stocks fell on Friday to close out a tumultuous week, as the US raised interest rate amid a major monetary policy shift. The US may find its interest hike less effective in curbing inflation, and the spillover risks of its monetary policy on international financial market and global economy should be closely watched, experts warned.

The US Federal Reserve (Fed) officials on Friday defended this week’s interest rate hike was not too late to curb inflation. The Fed on Wednesday announced a half-point increase in its benchmark rate, the sharpest rate hike since 2000, as part of its effort to fight inflation.

Admitting the US’ inflation is “far too high,” St. Louis Fed President James Bullard argued that the Fed is “not as far behind the curve,” to contain the inflation, Reuters reported.

Yet, Chinese experts warn that it may be difficult for the Fed to use monetary tightening policies such as interest rate hikes to curb high inflation, and their impact on global financial markets and the global economy, especially highly indebted economies, will be serious.

The slump in the stock market after the US interest rate hike reflects that the current bubble in the US stock market lacks the support of economic fundamentals, and the tightening measures such as interest rate hike bring risks to it, Yu Xiang, a non-resident research fellow at Center for International Security and Strategy, Tsinghua University, told the Global Times on Saturday.

There are deep-rooted structural causes for the inflation. The effect of tightening policy is expected to be less effective as US officials claimed, according to experts.

The current surging inflation in the US is the result of the superposition of multiple factors including the previous extremely loose monetary policy, the supply chain disruptions and the wage-price spiral, which is difficult to solve at present, said Dong Shaopeng, a senior research fellow at the Chongyang Institute for Financial Studies at Renmin University of China.

The most difficult problem to solve is the wage-price spiral, as the COVID-19 pandemic has worsened the gap between the rich and the poor in the US. Although the US reported an overall unemployment rate of 3.6 percent, the unemployment rate of certain groups, especially low-income groups, is still relatively high, Yu said.

Behind the soaring inflation in the US is the risk of economic stagnation, which is an intractable policy dilemma. It is estimated that it will take 3-5 years for the US to get out of this quagmire. Other economies should be prepared to deal with its spillover effects in the long run, said Gao Lingyun, an expert at the Chinese Academy of Social Sciences in Beijing.

The US is making a major monetary policy shift, which will have a long-term impact on the global macro situation and international capital flows. The process has just begun, and the monetary and fiscal authorities of all countries should make preparation for long-term response, rather than simply responding to a single rate hike, Gao remarked.