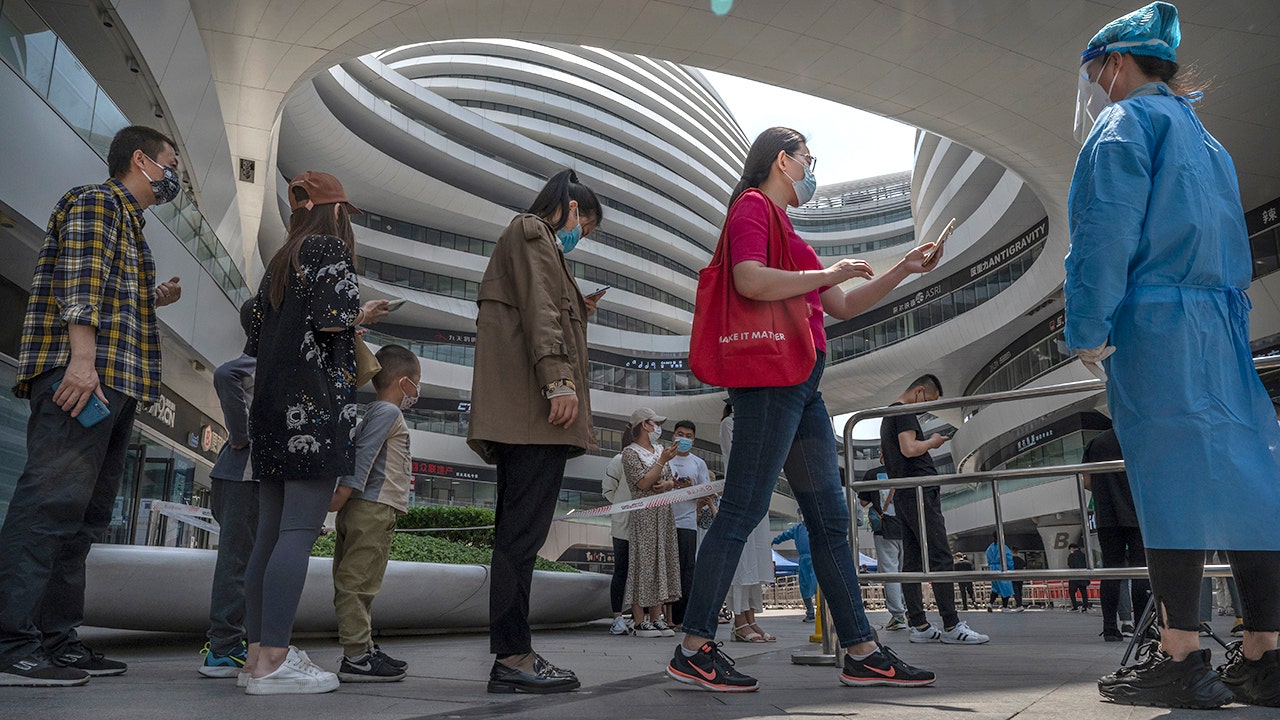 HONG KONG — As inflation soars around the world, the world’s second-largest economy has kept it at bay.

Consumer prices in China increased just 1.5% in March from a year earlier, after rising 0.9% in 2021 from the year before.

HOW CHINA IS HELPING TO FUEL RECORD-HIGH INFLATION

Although Chinese inflation is expected to tick up a bit more when fresh data is released this week, most economists believe it won’t surpass the government’s full-year target of around 3% in 2022.

Partly that is because consumer demand, an important source of U.S. inflation, is extremely weak in China right now. It is also because China uses aggressive tactics, including price controls and protectionist trade actions, to keep imported inflation from flowing through to consumers.  Analysts say while those strategies have helped China in the short run, they have long-term costs, and would be hard to replicate in more market-oriented economies.

People scan health codes as they line up on markers at a nucleic acid testing site to detect COVID-19 infections on May 4, 2022, at a shopping complex in Beijing, China.  (Photo by Kevin Frayer/Getty Images / Getty Images)

China is less susceptible to demand-led inflation than countries like the U.S. because it relies more heavily on investment than consumption to drive growth.

But consumption is even less influential than normal right now. Beijing provided far less stimulus than the U.S. during the pandemic, leaving households with less excess cash to spend. And the broader economy has been in the doldrums for months, after authorities launched regulatory crackdowns on the technology and real-estate industries and COVID-related lockdowns froze activity in some cities.

Consumption in China “has been weak, is weak and will be weak going forward,” said Leland Miller, chief executive officer of China Beige Book International, a research firm.

China still must contend with imported inflation since it buys large quantities of oil, gas and grains from abroad, prices of which have jumped amid supply shocks such as from Russia’s invasion of Ukraine.

China’s producer-price index, a gauge of factory-gate inflation that partly reflects prices manufacturers pay for imported raw materials, soared by 13.5% in October, the fastest in nearly 26 years, though it retreated to an 8.3% year-over-year gain in March.

But China maintains enormous reserves of strategic commodities it can tap to curb price pressures.

Last summer, authorities began releasing metals including copper and aluminum from state reserves. It has also released supplies of soybeans, rice and wheat.

In December, an official with China’s National Food and Strategic Reserves Administration said the country still had enough wheat stockpiled to meet demand for 1.5 years. Fitch Ratings says China had enough rice to meet 103% of annual demand at the end of last year.

In December, an official with China’s National Food and Strategic Reserves Administration said the country still had enough wheat stockpiled to meet demand for 1.5 years.  (Photo by Su Yang/Xinhua via Getty Images)

China can also call on state-owned enterprises and a state reserves system to act as buffers by absorbing higher import prices for essential commodities without passing them on to consumers immediately, said Isabella Weber, an economist at the University of Massachusetts Amherst. For instance, when oil prices get too high, Chinese refiners are expected to eat some of the price increases, subsidizing car owners’ gas costs. (Japan’s low inflation rate might be similarly due to corporate reluctance to pass higher wholesale prices on to customers.)

“The Chinese government is particularly focused on price stability,” Weber said. “There is a very intense consciousness around the importance of essential prices.”

China also uses trade policy to control prices, according to Chad Bown, senior fellow at the Peterson Institute for International Economics. Last year, it limited exports of domestic steel production and raised export taxes to tame surging steel prices at home. In March 2022, China’s steel prices were down 12% from May 2021, when it began imposing export restrictions.

All those moves come with costs that mount over time. The government must pay to maintain its reserves. Subsidies for vehicle owners can wipe out state-owned refiners’ profitability. Protectionist trade policies can lead to conflicts with other countries.

But Chinese history gives authorities a powerful incentive to avoid destabilizing price increases. Runaway inflation in the 1930s and 1940s helped undermine the ruling Nationalist government and open the door to the Communist Party’s takeover. Some scholars say a jump in consumer inflation to 18.8% in 1988 fueled protests that culminated in the bloody crackdown at Tiananmen Square the next year.

Ever since, Chinese inflation has been relatively tame. It last peaked at 5.9% during the global financial crisis in 2008 when a stimulus program pushed up asset prices. From 2011 and 2021, inflation averaged just 2.6%, official data shows.

Other factors have also helped: Pork, a staple on Chinese dinner tables, weighs heavily in China’s consumer-price index, and its price plunged 30% in 2021 as hog stocks were rebuilt after a deadly African swine fever outbreak sent prices soaring in 2018.

The biggest question for China is whether its tactics for managing prices can hold up over the long haul if inflation becomes endemic world-wide.

Recent lockdowns that confined tens of millions at home in Shanghai provided a glimpse of what inflation could look like in China. The lockdowns caused logistical bottlenecks, which made it harder for truckers to deliver goods to the city. Many residents complained on social media that vegetable and other food prices doubled or more as a result.

The tendency of other countries to mimic Chinese protectionism could pose another risk. Indonesia recently imposed an export ban on palm oil, which could hit China as it relies heavily on imports.

Still, some economists argue that sluggish household spending on goods and services will remain a damper on inflation for the foreseeable future.