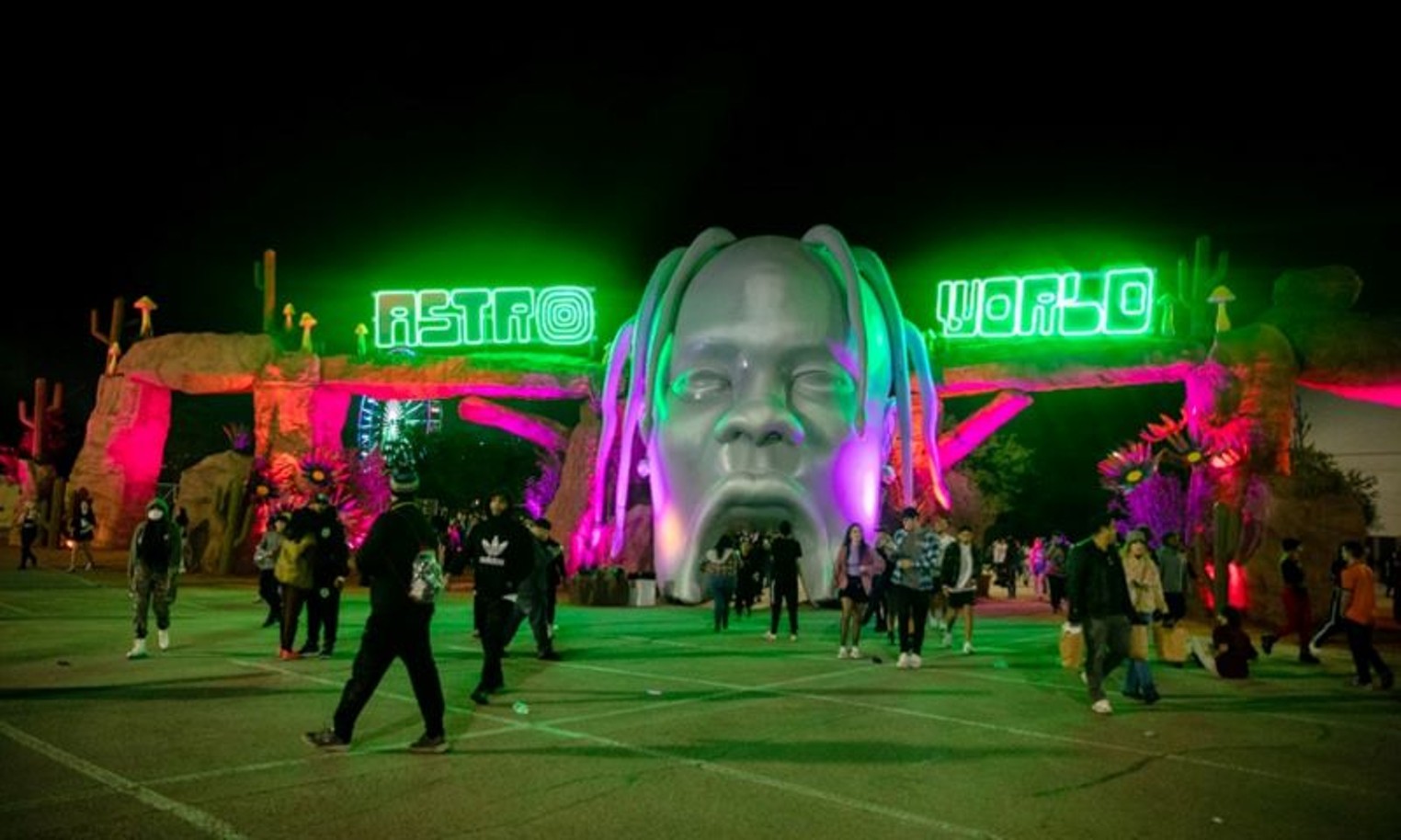 When Astroworld’s return was announced earlier this year, the 100,000 available tickets sold out within minutes. Friday night, all that enthusiasm became tragic as the wave of fans who rushed to see Travis Scott perform shortly after 9:30 p.m. resulted in eight reported deaths and several injuries.

Day 1 shut down early and day 2, which was to take place today, has been canceled. Investigators are still trying to determine exactly what happened, though Assistant Police Chief Larry Satterwhite said, as reported on ABC-13 News, that “Suddenly we had several people down on earth who were experiencing some form of cardiac arrest or some kind of medical episode. ”
The late night wave followed one earlier around 2pm during the day when the gates opened and a number of what were believed to be concert goers without tickets jumped fences and broke through security and out onto the grounds. While people were beaten down in the rush, no significant injuries or deaths were reported. Viral video soon emerged from the first rush.

Fans had broken through the perimeter defense in previous iterations of the festival, but even the expanded Astroworld security team and the strengthened police presence on Friday were no match for people determined to join the thousands of concert-goers at the event who attracted ticket buyers from the whole country.

There were points where Scott stopped the show, pointed to security or ambulance to move towards an area and then continued, but he seemed to be just as confused as everyone else as to what happened. In fact, depending on where you were at the festival, you could have completely missed out on injuries and deaths. The concert continued even though doctors were working on people on the ground in the crowd.

The Travis Scott team sent the following message to Instagram early this morning:

“Our hearts are with the Astroworld Festival family tonight – especially those we lost and their loved ones. We are focused on supporting local officials where we can. With that in mind, the festival will no longer be held on Saturday. As the authorities mentioned in their press conference earlier, they take a closer look at the series of cardiac arrests that took place.If you have relevant information about this, please contact @HoustonPolice.Thanks to our partners in the Houston Police Department, Fire Department and NRG Park for their response and support. “

Harris County Judge Lina Hidalgo called it “Obviously an extremely tragic night. Our hearts are broken. People go to these events looking for a good time, a chance to relax, to create memories.”

Earlier Friday, everyone and everyone was excited about yet another successful festival, which has turned into a week-long celebration in Houston, culminating in a planned two-day festival featuring tracks such as Sza, Toro Y Moi, Lil Baby, Metro Boomin and Master P. And then there was the drop-in from Drake.

“Let me tell you something,” exhaled an almost breathless Drake after performing in front of a sea of ​​fans in NRG Park Friday night. “This is special. This is not just happening. It takes a creative mind to put all this together. It takes a special city to help this get together, and it takes fans like you to make it stick together.”

The creative mind he was talking about, Travis Scott, was standing next to him, in the middle of the stage, in front of a three-story mountain filled with LCD screens. Travis went towards the crowd as the intro to Sicko Mode blared through the speakers. Waves rippled through the ocean of people as fans pushed toward the stage, waiting for the beat to fall. Heat hurried to meet the audience as flames, steam and fireworks shot up into the night sky.

On Saturday morning, however, families searched for relatives who had been at the festival in a reunion center set up by police at the Wyndham Hotel at 610 and Kirby, and some were diverted to area hospitals.

And at 8 o’clock AlertHouston sent out this message:

“What happened at the Astroworld Festival was a tragedy. An estimated 50,000 people attended the event on Friday night and expected to enjoy a music concert with friends and return safely. I offer my condolences to the families of the eight people who died and those around. 17 people were injured in the incident and many of them had cardiac arrest.

“Immediately after the tragedy, the city began helping with resources and necessary support. A reunion center has been set up at 8686 Kirby Dr. so families can reconnect with their loved ones attending the event. Families looking for their loved ones can also call 3 -1 -1.

“This was a major event that happened in the city and on Harris County property. Today, law enforcement will speak with concert promoters and witnesses and review videos available from the event and inside the festival venue.

“I have called for a detailed briefing from all stakeholders, including Live Nation, Harris County, NRG Park, Police, Fire, Office of Emergency Management and other agencies, explaining how the incident got out of control, leading to deaths and injuries. of several participants. “

And Governor Abbott expressed his sympathy and offered state aid:

“What happened at the Astroworld Festival last night was tragic, and our hearts are with those who lost their lives and those who were wounded in the fearsome crowd,” Governor Abbott said. “Thank you to the first responders and Good Samaritans who were on the scene and immediately took care of those who were injured in the crowd. The state of Texas is ready to help with the response, and I have instructed the Texas Department of Public Safety to make the state “Resources available to support the investigation. I ask the Texans to join Cecilia and me in praying for those affected by this tragedy.”