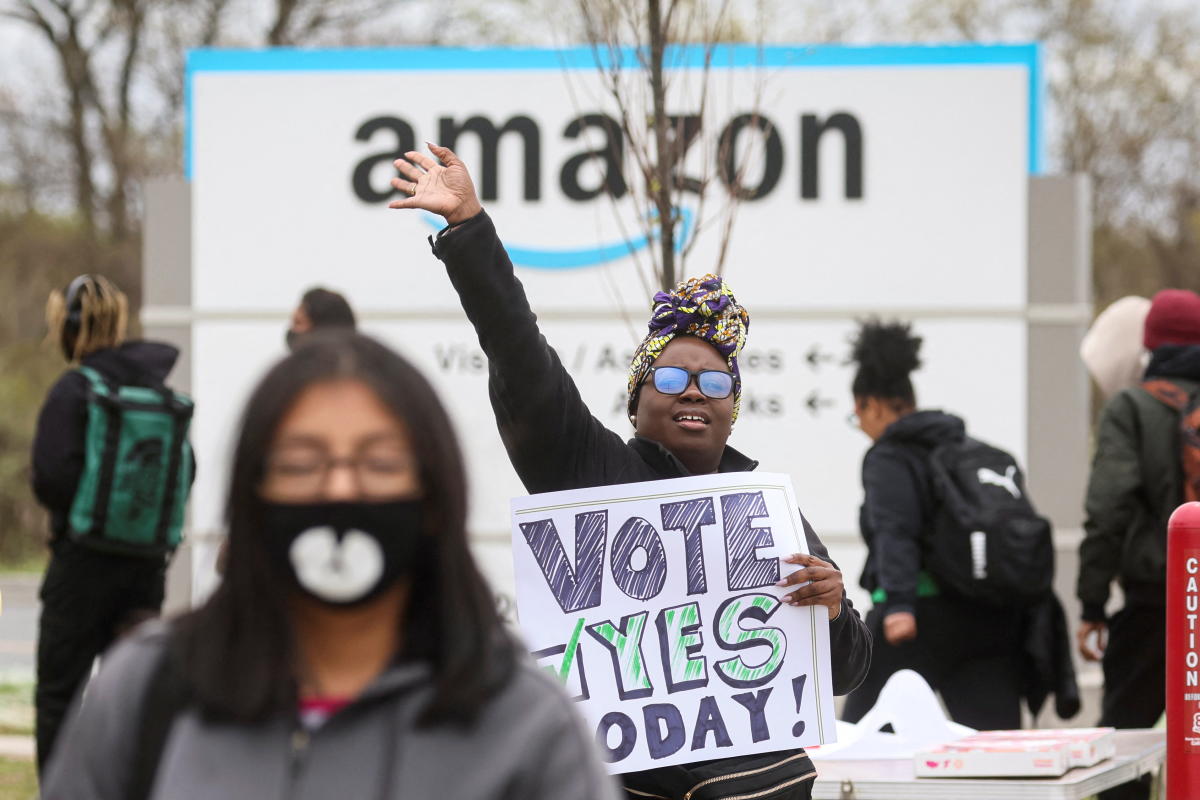 Workers at an Amazon (AMZN) warehouse in Staten Island, N.Y. rejected a union bid Monday, but this is far from the last battleground for the Amazon Labor Union (ALU) and the e-commerce giant.

This warehouse, LDJ5, is in Staten Island, as is JFK8, a separate Amazon warehouse that won a historic union victory about a month ago.

What happens next for the ALU is vitally important. The ALU needs to expand to survive in the long-term, and will likely struggle to find bargaining power as it organizes warehouses one by one, said Paul Clark, a labor expert at Pennsylvania State University.

“One warehouse being on strike is not going to hurt Amazon at all,” he told Yahoo Finance. “The only way Amazon is going to really negotiate with the union, offering what they really want, is if they can organize a critical mass of warehouses.”

A “critical mass” would entail 50 warehouses across the U.S. or a high percentage of warehouses in a geographic area, according to Clark. Still, there are signs that additional warehouse workers may be interested in unionizing. Last month, ALU president Chris Smalls told Yahoo Finance that employees at more than 100 U.S.-based Amazon facilities had contacted the ALU to express interest in unionizing.

Across the U.S., unions have made a comeback, after falling out of favor for decades. Amazon has been a key company where these efforts have happened, and the same is true of Starbucks (SBUX). In recent months, more than 200 Starbucks stores have sought elections, and to date at least 20 are unionized.

After the results of the LDJ5 election, the ALU tweeted: “The organizing will continue at this facility and beyond. The fight has just begun.”

Meanwhile, Amazon spokesperson Kelly Nantel said in a statement, “We’re glad that our team at LDJ5 were able to have their voices heard.”

‘Real power in the workplace’

Some experts believe that popular opinion and the historic nature of the ALU’s victory a month ago will empower the union and warehouse workers for a while, too. The National Labor Relations Board says that, as part of a fair bargaining process, unilateral changes are prohibited “during the term of a collective-bargaining agreement, unless the union has clearly and unmistakably waived its right to bargain or the change is too minor to require bargaining.”

“With the election certification, even without a contract the ALU is going to have some real power in the workplace because management can’t make any unilateral changes for one year,” said Rand Wilson, a longtime union organizer and labor communicator.

“But that power can also be turned against the union,” Wilson added. “Management will say, well, we want to give everyone a 5% wage increase, but the union won’t agree to it. Then, that becomes the kind of back and forth that causes workers to become frustrated. All the ‘good things’ that could happen aren’t happening because the union is in the way. That becomes management’s cudgel to force a decertification vote.”

Notably, there’s still another union election that hasn’t yet been resolved, either in favor of Amazon or the union. The results of a union election in the Amazon warehouse in Bessemer, Ala. are still to be determined, though the ALU is not involved in that election.

Bargaining will be relatively new territory for everyone involved. In these negotiations, there will be a certain level of inexperience on both sides. Amazon has never negotiated with a U.S. union, and the ALU has never gone through a bargaining process, according to Harry Katz, a labor expert at Cornell University.

The conditions that are driving this union wave, like massive wealth inequality, have been building for decades, according to Jennifer Sherer, senior state policy coordinator at the Economic Policy Institute’s Worker Power Project. In 1965, CEOs made 24 times more than their average worker, whereas in 2009 CEOs made 185 times more, according to Stanford University.

“People, broadly speaking, are well-aware that we have the worst income and wealth inequality in more than a hundred years,” said Sherer. “People also generally know that the pandemic has meant enormous profits for many of the companies where workers are unionizing. There’s just so little to be gained right now for a company’s image if they’re not willing to share the wealth with employees who’ve risked their health on the front lines, working intolerable hours.”

Wilson agrees, adding that the economic inequality conversation has made its way to Washington D.C., elevating the dialogue’s profile.

“The issue of economic inequality is uppermost, not only in the minds of workers, but now for many policymakers too,” he said.

Looking forward, and drawing on these conditions, media relations are a major lever that the ALU can and should pull. The ALU will likely need to “supplement strike leverage with public relations,” said Katz.

“Companies like Amazon and Starbucks are especially susceptible to public relations… because they’re consumer-oriented,” Katz added. “They’re not producing nuts-and-bolts no one sees, their image matters, how the public views them matters, and the union can use that as leverage.”

Allie Garfinkle is a senior tech reporter at Yahoo Finance. Find her on twitter @agarfinks.

Read the latest financial and business news from Yahoo Finance.