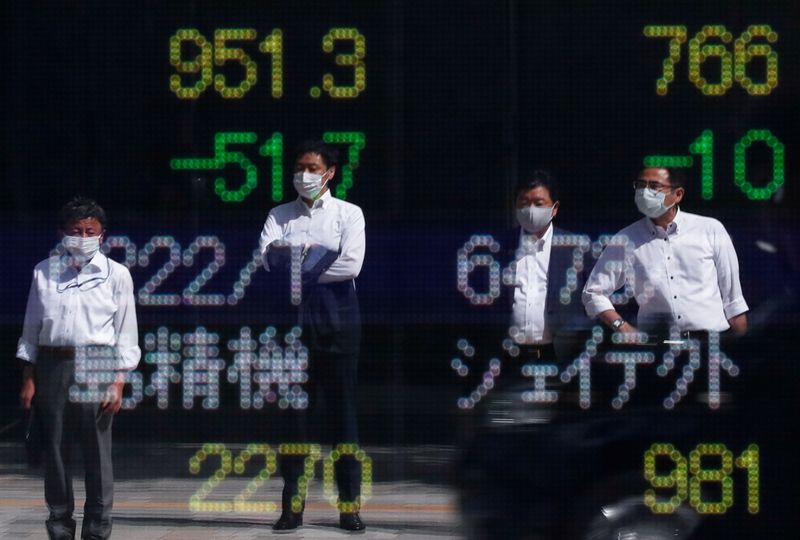 © Reuters. FILE PHOTO: Passers-by wearing protective masks are reflected on an electronic board showing stock prices outside a brokerage house in the middle of the outbreak of coronavirus disease (COVID-19), in Tokyo, Japan, September 29, 2021. REUTERS / Issei Kato

LONDON (Reuters) – Futures on the US stock index pointed to a fall at the opening of Wall Street after Thanksgiving, and oil hit a two-month low as fears of a possibly vaccine-resistant variant of coronavirus sent investors rushing to safe assets .

Researchers say the variant, discovered in South Africa, Botswana, Israel and Hong Kong, has an unusual combination of mutations, may avoid immune responses and may be more transmissible.

Britain said it was the most significant variant to date and was one of several countries that introduced travel restrictions for southern Africa.

The European Commission also said it wanted to consider suspending travel from countries where the new variant has been identified, although the World Health Organization (WHO) warned against hastily imposing such restrictions.

“This may be the moment when people look back on derailing the economic recovery and interest rate hikes, but what we have is a major deployment of uncertainty rather than something significant,” said Peter Rutter, chief executive officer at Royal London Asset Management.

“The fact we do not know is what pertains to the market.”

The WHO convenes an expert meeting on Friday to assess whether the new variant is a “variant of concern”.

It will take a few weeks to understand the effect of the variant, a spokesman said.

The US stock markets closed Thursday for Thanksgiving and closed early Friday.

Global equities were down 0.7%, heading for their worst week since early October.

European equities were 2.6% lower, heading for their worst day since September 2020. ()

The pandemic playbooks were out again. Tourism-sensitive stocks such as the aircraft engine manufacturer Rolls Royce (LON :), easyJet (LON 🙂 and International Consolidated Airlines (OTC 🙂 all experienced double-digit losses in Europe.

Malaysian rubber glove manufacturer Supermax, which rose 1500% during the first wave of the pandemic, jumped 15%.

Giles Coghlan, chief currency analyst at brokerage house HYCM, said the closing of the U.S. market for Thanksgiving had exacerbated the movements.

“We need to see how transmissible this variant is, is it able to avoid the vaccines – this is crucial,” Coghlan said.

“I expect this story to drag on for a few days until researchers have a better understanding of it.”

As investors searched for safe assets, the yen jumped more than 1% to $ 113.9 per dollar, after disappearing earlier in the week at a five-year low.

However, the single currency fell to close to the 6-1 / 2 year low level against the Swiss franc to 1,044 francs per annum. Euro.

fell more than 1% to a one-year low and the bond yield in 2030 rose by 19 basis points (bps). Bond yields move in reverse to the price.

The market fluctuations come on the back of an already growing concern about COVID-19 outbreaks, which drive restrictions on movement and activity in Europe and abroad.

Markets had previously been optimistic about the strength of the economic recovery despite rising fears of inflation.

“As we enter the end of the year, investors may prefer to stay a little more in safe haven, and we also need to assess how it is included in central banks’ risk assessments, although this variant turns out not to be a major concern,” he said. Commerzbank (DE 🙂 assesses strategist Rainer Guntermann.

“It’s a reminder that the pandemic can reappear almost anytime.”