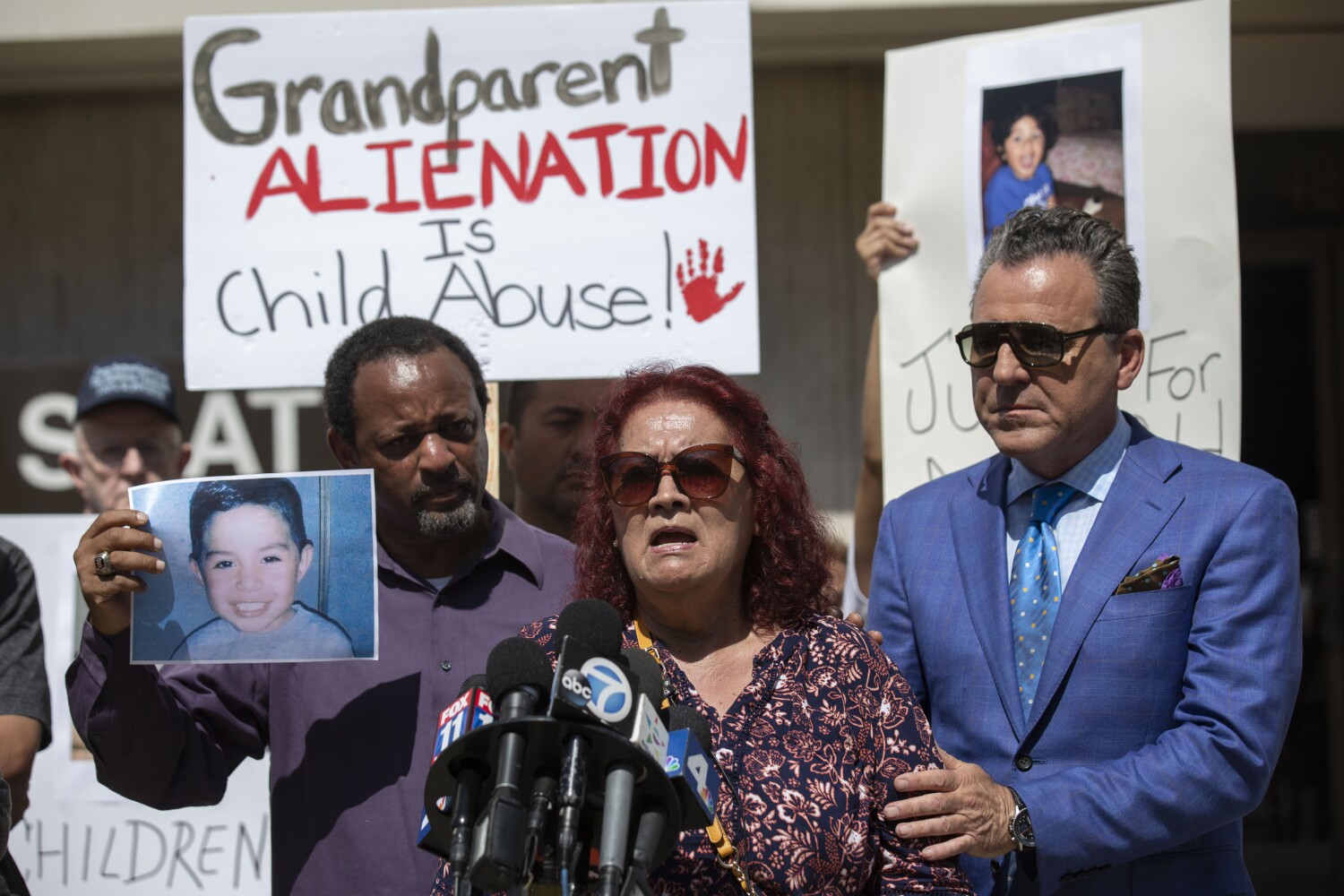 Bobby Cagle’s abrupt resignation as head of Los Angeles County’s Department of Children and Family Services this week limits a tumultuous period for the nation’s largest child protection agency and will force county leaders to contend with major political issues over how social workers respond to reports of abuse and neglect and choose to intervene in families.

DCFS is facing increasing scrutiny after a number of much-publicized deaths and injuries to children on their guard, including a 4-year-old boy in foster care who was admitted to a coma last month.

The agency is still struggling with the impact of the COVID-19 pandemic, in which teachers and other compulsory journalists had far less contact with children, and court closures led to a skyrocketing backlog in cases.

And Cagle’s exit, which takes effect Dec. 31, comes as county leaders and a number of civilian groups have intensified calls for the DCFS to address racial and ethnic inequalities, including an over-representation of black children in foster care. Although 7.5% of LA County children are black, they account for more than 27% of children in foster care.

County officials must find a new director to oversee a large staff of 9,000 in about 20 offices and a budget of more than $ 2.4 billion – but also carry out reforms amid a tangle of political and bourgeois pressure.

“It’s not a job for the faint of heart,” said Charity Chandler-Cole, executive director of CASA in Los Angeles, which pairs court-appointed attorneys with children in foster care. Chandler-Cole described the agency as at a crossroads: “There is so much to reckon with in the history of our past. There is a lot of attention to how LA County and DCFS will respond to these challenges in addressing equality and racial justice.”

She added: “I felt like Bobby did and was ready to support all of these initiatives – for me it was shocking to see him walk away.”

Cagle declined a request for an interview through a DCFS spokeswoman. A person familiar with his mindset, and who spoke on condition of anonymity, described him as “exhausted” and said that his departure was not forced by any particular case.

The DCFS offered no explanation at the time of his resignation, but in a statement, the agency said he planned to enter the private sector after three decades in public service.

“It has been an honor to lead this important work and to serve with all of you, the thousands of dedicated child welfare staff in LA County DCFS,” Cagle wrote in an email to staff Tuesday night.

“It’s a bit of a shock to me,” said Michael Nash, the retired judge who heads LA County’s Office of Child Protection. Nash noted that Cagle served four years, which is more than many of his predecessors: “It seems the directors’ life expectancy is not that great. It’s a reflection of how hard the job is and how important it is. The risk is so high – we are dealing with the most vulnerable people in our population, our children. “

David Green, a social worker who is also president of Service Employees International Union Local 721, which represents more than 9,000 DCFS employees among its 95,000 members, said he saw Cagle as a partner and collaborator, especially during the pandemic.

Green recalled being in “constant communication” with Cagle as they tried to protect DCFS personnel – who were still on site and in need of vital protective equipment – as well as vulnerable families.

Cagle took over the operation of LA County’s child protection apparatus in 2017 after leading Georgia’s family and child services department.

At the time, DCFS was wasted after the death of 8-year-old Gabriel Fernandez, the Palmdale boy who was abused and tortured by his mother and her boyfriend.

The case of Gabriel seemed to crystallize the county’s failure to care for vulnerable children. Four social workers in LA County were charged with child abuse and forgery of public records in connection with their work on Gabriel’s case, even though an appeals court dropped the case last year.

Cagle also stepped into the role without the full backing of the five-member supervisory board. The board had voted 3 to 2 to appoint Cagle, with then-Supervisor Mark Ridley-Thomas and Supervisor Janice Hahn preferring a lawyer who worked in the Obama administration, JooYeun Chang.

When Cagle took over, he had to contend with an increasing backlog in the approval process for foster parents and relatives.

“He pulled his mandate to all hands on deck and did a good job of reducing the backlog significantly,” Nash said.

Supervisor Sheila Kuehl praised Cagle’s dedication to developing programs for LGBTQ foster care, implementing policies to keep children with relatives, and developing a strategic plan that the agency will use even after he leaves.

Cagle also advocated that foster parents and caregivers should receive adequate funding at an earlier stage in the process, Nash said.

Chandler-Cole credited Cagle for being supportive and listening and acknowledging the complaints among people of color to DCFS.

“He did not become defensive and he did not come up with excuses,” Chandler-Cole said. “He was constantly listening and he wanted to be a part of the change.”

Other high-profile child deaths continued to plague the agency, highlighting missed opportunities by child welfare workers and agency staff. In 2018, Anthony Avalos, 10, died after enduring torture and prolonged abuse. The following year, 4-year-old Noah Cuatro died despite DCFS caseworkers securing a court order to remove Noah from his parents’ home, but decided not to carry it out.

A Times / UC Berkeley study earlier this year found big red flags in the agency’s handling of Noah Cuatro, who was killed despite a lifetime of surveillance and intervention by social workers.

Cagle’s support seemed to ebb in the fall in the wake of his foster mother’s alleged abuse of a boy. The boy, identified as Andres F., was hospitalized with life-threatening injuries and his foster mother, Gabriela Casarez, 26, was charged with two counts of child abuse and one count of assault leading to coma or paralysis.

LA County executives sought the investigation into DCFS ‘handling of the case, as well as how caseworkers navigated cultural and linguistic barriers. The boy and his birth mother speak a native Mayan language, and his aunt told journalist Alberto Godinez that caseworkers had failed to communicate effectively with the family before removing him and placing him in foster care.

Hahn was particularly critical of the agency after details of the case were released.

“This story is shocking,” Hahn said earlier this month when he called for the investigation. “We had to protect this boy when we took him away from his family.”

No board members agreed to an interview on DCFS, and they were cautious in their comments about Cagle, emphasizing instead the qualities of the next DCFS leader: “It’s a big job that requires vision, responsibility and a dedication to ensure that every child has a stable home, ”said Supervisor Kathryn Barger.

Supervisor Hilda Solis said she wanted a director “who exemplifies the linguistic and cultural diversity of this county’s residents, understands how to prevent abuse and neglect, and is committed to addressing inequalities in our child welfare.”

“I expect input from those with lived experience to be at the forefront of this process, allowing us to recruit a director who recreates what it means to serve children and family,” Solis said in a statement.

Former LA County Supervisor Zev Yaroslavsky said the practical challenges of the job were exacerbated by broader pressure. “The problem is that the county is expected to step into the rupture caused by the frayed social structure of our country,” he said.

“If a parent or guardians or guardians can not do the job, then imagine why a government agency can step into the breach and become a surrogate parent, it is not designed for success.”

He also pointed to the five supervisors supervising the role, rather than a single CEO.