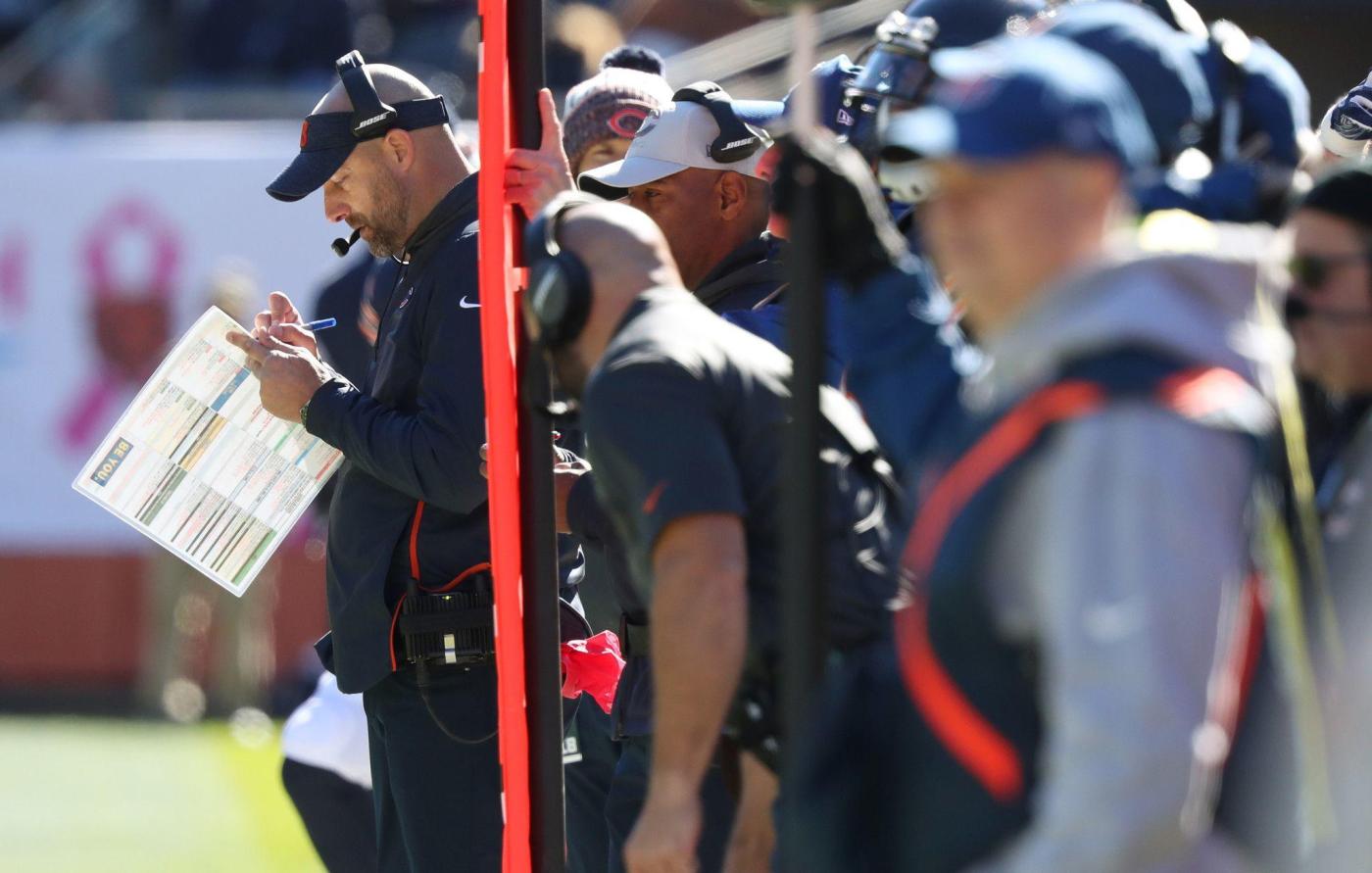 In a short week, the prelude to the Chicago Bears’ game against the Detroit Lions on Thursday has had a lot of drama.

An injury to rookie quarterback Justin Fields and the return of veteran Andy Dalton as starter. A report that coach Matt Nagy had been told he would be fired after the Thanksgiving match and Nagy’s subsequent rejection. And – oh, yes – the Bears are trying to move past a five-game losing streak after giving up game-winning drives in the final minute of the last two games.

Now the Bears face the Lions, whose own ongoing drama is that they have not won a match since December 6, 2020. The opponent? The bears.

As Thursday’s kickoff approaches, here’s our snapshot of the match.

1. Man in the spotlight

When Nagy’s bosses did not issue a statement on Tuesday about a Patch.com report that Thursday’s match will be Nagy’s last, they left the coach open to days of speculation about his job status.

In a nationally televised game between two NFC bottom dwellers, and without Fields playing, Nagy’s future will be about the broadcast.

Nagy did his best to address the issues at his news conference on Tuesday, noting that at the time he had not spoken to Chairman George McCaskey, President and CEO Ted Phillips or General Manager Ryan Pace this week due to the short preparation time for Lions.

“You can not focus on that,” Nagy said of job speculation. “You have to stay focused on what you do every day, which is football and the Xs and the Os and all that. It’s important to do that.… Our job is to focus on day to day and win this match. on Thursday. And that’s it. It’s as simple as I keep it. ”

The Bears coach on Thursday has a lot to worry about after the 16-13 loss to the Lamar Jackson-less Baltimore Ravens on Sunday. Like not being embarrassed again by a Lions team that only has a 16-16 draw with the Pittsburgh Steelers separating them from 0-10.

The Lions’ victory over the Bears last year at Soldier Field sparked a flurry of questions about Nagy’s job status. The Bears then won three in a row, reached the playoffs and decided to keep Nagy on board.

And now they are here again.

How will Andy Dalton fare in his first start since September 19th?

Dalton said Tuesday that he still believes he is a starter in this league, and while Fields is recovering from injured ribs he suffered during the loss to the Ravens, Dalton will have a chance to show it.

Dalton started only twice before losing his job to Fields earlier in the season while out with a bone bruise on his left knee. He has completed 48 of 73 passes on 471 yards with three touchdowns and an interception in four games. That includes passes for 201 yards and two touchdowns in the second half against the Ravens.

Dalton’s experience – 144 starts over 11 seasons – made it easier for the Bears to turn to their backup with limited training time this week.

“It’s just talking all the way through and making sure we’re on the same page about how we want things running and how we want to perform some of those plays,” Dalton said. “In a short week, there’s a lot of review. It’s a lot just talking it through. There are a lot of mental things you go through. All of those things are really important as it leads up to the match on Thursday.”

“He radiates pretty good confidence to the group, the way he carries himself and the way he does his job,” Lazor said. “When you’re out there with him, whether it’s for a review or whatever, they feel like he wants to be ready.”

After missing the Lions’ loss to the Cleveland Browns on Sunday with an oblique injury, quarterback Jared Goff was listed as limited during the team’s reviews this week.

Goff and Lions coach Dan Campbell opened up the possibility that Goff could start in place of Tim Boyle, who threw in 77 yards with two interceptions in his first career start against the Browns.

Goff’s return – it’s a match day decision, he said – would be a major obstacle for a Bears team that gave up game-winning goals late in the last two games.

Defensive coordinator Sean Desai spent a lot of time on Tuesday talking about the issues in the secondary that led to the Ravens ‘late touchdown drive, including a burst of coverage on Sammy Watkins’ 29-yard catch to the 3-yard line. Desai said the blame for that miscommunication fell on more than just cornerback Kindle Vildor.

But he acknowledged that Vildor is undergoing a tough patch, especially after Ravens quarterback Tyler Huntley stayed away from cornerback Jaylon Johnson and often targeted him with Vildor.

“I’m going to say the Kindle has kind of been a bit in a shed,” Desai said. “And it’s hard when you’re the only corner that gets targeted because Jaylon’s goal has been down. And Jaylon puts out his fire because he got the one goal early in the game where he in his honor knew what happened .

“They say, ‘Oh, yes, we can’t go to Jaylon anymore,’ so they went to the Kindle, and they often went to him. And he’s a young corner. ‘He’ll have to go through those growing pains a little bit. He’ll have to endure it, and it’s a good challenge for him to make sure he’s mentally tough enough to go through it.

“And we’re here to support him through it. And we have to make sure we help him when we can help him, and even if it’s rotation – or whatever it is we have to do. to make sure he’s put in a situation where he can excel – to help him get out of it. ”

While the loss to the Ravens was ugly, two Bears defenders delivered brilliant performances.

“In games like that, these superstars have to play like superstars, and they did,” Desai said. “It’s a high level football match. There are not many inside linebackers who make so many tackles against that running team.… Roquan, the level of play he is playing at right now, is a bit out of this world.”

Smith’s 17 tackles were a high career level, but he said he does not put much emphasis on his own performance.

“I just know that when I go out there, I’m the best player out there,” Smith said. “So that’s my thing. Just go out there week in and week out and show it.”

Bears wide receiver Allen Robinson said there has been “constant improvement” as he tries to get over a hamstring injury that kept him out of Sunday’s game against the Ravens.

“I keep pushing through and trying to do what I have to do to make myself available,” Robinson said. “It’s always my No. 1 priority is to be out on the grass.”

The Bears estimated training designations Monday and Tuesday after their reviews, and Robinson was listed as not having practiced both days. Fields, defensive lineman Akiem Hicks (ankle) and running back Damien Williams (calf) did not train either.

Injuries have taken a heavy toll on the Bears, and it’s a lot for the organization to overcome in a short week. More worrying is the black cloud hanging over Halas Hall. It’s an ominous time for the franchise, and there’s no way to account for how much it will affect players and coaches, no matter how hard they try to block questions about the future.

After the wild days the bears have had, I do not think anyone would be shocked if they lost Thursday, even to the humble lions. No matter if Matt Nagy was fired or not, Bear’s ownership put Nagy and his coaches and players in a terrible position by not addressing the report on his job status prior to this match. It can have a legitimate effect on how the team plays, and the fact that a few key veterans are injured does not help as the Bears try to overcome the distractions. We do not know what Andy Dalton will give the Bears, but his experience – and probably also his motivation – equips him to step in and lead a decent performance, even in a short week. The late collapse of the Bears defense has been worrying, even more so because Sunday happened against Raven’s backup Tyler Huntley. But defenders like Roquan Smith and Robert Quinn delivered monster performances. I’m guessing players like that will help the Bears rise above the clutter in Halas Hall this week.