Raheem Sterling is again over the Catalan media on Monday, as Barcelona’s eagerness for a January deal remains the biggest transfer story around the club.

Mundo Deportivo has the equivalent of almost a double-page spread, but there are many words without saying quite a lot, and certainly nothing in the form of an actual update.

On Sunday, Catalan media saw explain that Manchester City are looking for around 50 million euros for the 26-year-old. It would be out of the question for Barcelona in terms of a transfer in January, but it was made clear that a loan with a buy-in clause, which would become mandatory if Sterling played a certain number of appearances, was possible.

Well, Sport now says that is not the case.

First, they explain that Barcelona have been working on the potential signing for several months. It is even claimed that they had a deal from both Sterling and Manchester City at the end of the summer window, but the lack of contract to sign either Cristiano Ronaldo or Harry Kane caused Pep Guardiola’s side to kill things.

As far as things look now, Sport says: ‘Barça are only willing to negotiate a transfer with one 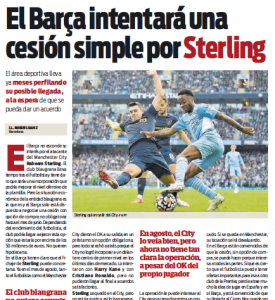 non-mandatory call option until June. Depending on the performance of the footballer, the club could take advantage of this opportunity, which would be over 50 million euros. ‘

So in other words, they do not want to commit to a permanent transfer.

Manchester City’s attitude to it will be interesting.